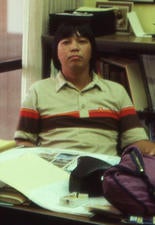 Recreation within the UC Riverside campus emerged in the 1970’s when Butch Mayo, the UCR recreation intramural director, introduced the Intramural Sports (IM) program on campus. The department at the time worked within the confines of Costo Hall, planning activities and offering extra-curricular resources for all Highlanders. However, there were challenges when it came to space, equipment and facility use. For example, students who wanted to lift weights had to share the Athletics building's over-crowded weight room. Equipment was sparse and the weight room hours were minimal.

Although space was limited, the department offered a wide variety of courses that ranged from “Basic Breadmaking” and “Yugoslavian Folk Dancing” to “Basic Car Mechanics” and other forms of activities. Recreational classes were usually well attended, but it was the Intramural Sports program that resonated most with students. Highlanders would camp outside the Recreation office just to secure their place on a team. Due to the Athletic department reserving the gym, some IM games were played as late as 1:00 a.m. These challenges were just a part of student life at UC Riverside and would remain so until 1990.

With the increase in popularity of team sports, outdoor trips, and various fitness and activity classes, Highlanders voted and passed a referendum in 1990 to fund the building of a Student Recreation Center (SRC); where each student would pay $59 per quarter. This facility would be the first of its kind on campus, where student from all walks of life could come together and participate in healthy and social activities. After four years of planning and construction, the University of California, Riverside Student Recreation Center finally opened its doors on January 11, 1994.

The Student Recreation Center provided UCR students with a space to participate and explore fitness at all levels. Since it's opening, the SRC became known as a community hub for students and ushered in a new wave of camaraderie and Highlander spirit.

In 1998, Butch Mayo retired from UCR Recreation and announced that Lindy Fenex would become his successor. Under Fenex's leadership, the department reinvigorated fitness, intramural, and outdoor programs; providing more opportunities for students to take part in various activities at all levels.

During a student-led Recreation Facilities Governing Board (RGB) meeting in 2007, a graduate student requested that a new pool be built at the SRC. Other student voices soon followed, and it became evidently clear that the SRC needed to expand to accommodate these requests and serve a growing student population. A 2010 survey was conducted to assess recreation needs and student willingness to contribute to the costs of expanding the SRC. The results from the survey overwhelming showed that students needed and were willing to pay for this project, and in accordance with the RGB constitution and bylaws, the Graduate Student Association (GSA) and the Associated Students of UCR (ASUCR) approved an SRC expansion referendum to be placed on the annual ASUCR/GSA Student Elections ballot. The referendum was voted on and passed by UCR students in favor of expanding the SRC.

Planning and construction on the expansion took four years (2010 - 2014) and nearly doubled the size of the current SRC (increasing from 80,000 square feet to 155,000 square feet), adding an indoor climbing wall, an indoor track, a pool, a multi-activity court and newly renovated weight rooms. The department also grew its programming with Aquatics, CookingWell, and Ropes; bringing in more jobs for students to help manage the facility and these programs. On October 3, 2014, the expanded SRC had an Opening Celebration event that included popping a half mile of bubble wrap for a world record attempt, followed by a day of activities and prizes.

“Some major features of the SRC South include: a 237,000-gallon pool, which contains both lap and recreational swim, in addition to a vortex and current channel; a sand volleyball court outside; a scenic indoor track; upstairs cardio equipment with built-in screens to watch movies, shows or to connect via phone; as well as a boulder and rock climbing wall.”